Denver, Colorado, USA
Each program in the SC Conference is dedicated to showcasing work in high performance computing, networking, storage and analysis by the international HPC community. This year OpenACC organization will be participating in tutorials, BoF, user group meeting, and multiple talks. Come join us at the conference, meet OpenACC members and users! 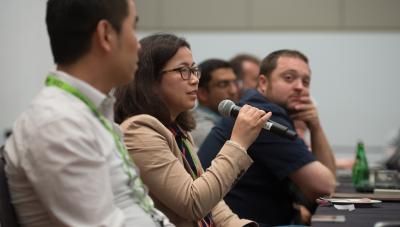 OpenACC.org will be represented at ISC by its members, supporters, and users. Please join us at the conference to learn more about OpenACC, share your research and feedback, and become a part of our growing user community and organization.

OpenACC users will gather to discuss OpenACC-related research, upcoming events, classes, available resources and to brainstorm what can be done in the future to help the community grow. Seating is limited. Please register in advance if you'd like to attend.

This tutorial will give an opportunity to obtain in-depth knowledge and experience with GPU-accelerated POWER nodes. It focuses on porting applications to a single node and covers the topics architecture, compilers, performance analysis and tuning, and multi-GPU programming. The tutorial will include an overview of the new NVLink-based node architectures, lectures on first-hand experience in porting to this architecture, and exercises using tools to focus on performance.

This workshop aims to solicit papers that explore innovative language features and their implementations, stories and lessons learnt while using directives to migrate scientific legacy code to parallel processors, state-of-the-art compilation and runtime scheduling techniques, performance optimization and analysis on state-of-the-art hardware and so on. Read more here.

This workshop invites unpublished manuscripts from academia, industry, and government laboratories on topics pertaining to the needs and approaches for augmenting undergraduate and graduate education in Computer Science and Engineering, Computational Science, and computational courses for both STEM and business disciplines with PDC and HPC concepts.

OpenACC, a directive-based high-level parallel programming model, has gained rapid momentum among scientific application users - the key drivers of specification. The user-friendly programming model has facilitated migration of several applications such as CAM, ANSYS Fluent, Gaussian, VASP, COSMO and is also seen as the entry-level programming model on the top 5 supercomputers (Top500 list). As in previous years, this BoF invites scientists, programmers and researchers to discuss their experiences in adopting OpenACC for scientific legacy applications, learn about the roadmaps from implementers and the latest developments in the specification.

The Oak Ridge Leadership Computing Facility (OLCF) in partnership with the IBM/NVIDIA Center of Excellence and scientific application developers is preparing a suite of scientific codes for its user programs. The Center for Accelerated Application Readiness (CAAR) projects are using an Early Access Power8+/Pascal system named SummitDev to prepare for the Power9/Volta system Summit. This presentation highlights achievements on this system, and the experience of the teams that will be a valuable resource for other development teams. Read More

Unstructured-Grid CFD Algorithms on the NVIDIA Pascal and Volta Architectures

The Oak Ridge Leadership Computing Facility (OLCF) in partnership with the IBM/NVIDIA Center of Excellence and scientific application developers is preparing a suite of scientific codes for its user programs. The Center for Accelerated Application Readiness (CAAR) projects are using an Early Access Power8+/Pascal system named SummitDev to prepare for the Power9/Volta system Summit. This presentation highlights achievements on this system, and the experience of the teams that will be a valuable resource for other development teams. Read More

CUDA Unified Memory for NVIDIA Tesla GPUs offers programmers a unified view of memory on GPU-accelerated compute nodes. The CPUs can access GPU high-bandwidth memory directly, the GPUs can access CPU main memory directly, and memory pages migrate automatically between the two when the CUDA Unified Memory manager determines it is performance-profitable. PGI OpenACC compilers now leverage this capability on allocatable data to dramatically simplify parallelization and incremental optimization of HPC applications for GPUs. In the future it will extend to all types of data, and programmer-driven data management will become an optimization rather than a requirement. This talk will summarize the current status and near future of OpenACC programming and optimization for GPU-accelerated compute nodes with CUDA Unified Memory.Read More

An Approach to Developing MPAS on GPUs

MPAS-A is a general circulation (global) model of the Earth’s atmosphere that is designed to work down to so-called non-hydrostatic scales where convective (vertical) cloud processes are resolved. As a part of NCAR's Weather and Climate Alliance (WACA) project, a team consisting of NCAR staff, faculty and students at the University of Wyoming, and group of NVIDIA & NVIDIA PGI developers, developed a portable and multi-GPU implementation of the dry dynamical core using OpenACC. Read More

Please stop by the NVIDIA booth for self-paced labs during exhibit hours on Monday through Thursday.