OpenACC made it efficient to develop for GPU-based hardware while retaining a single source for almost all the COSMO physics code. 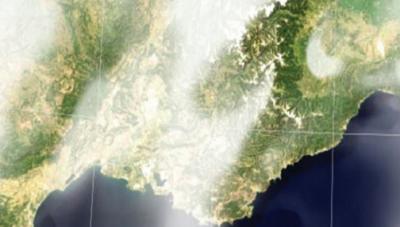 COSMO is a local-area atmospheric model used for numerical weather prediction. It is maintained by the Consortium for Small-scale Modeling (a.k.a., COSMO), and used by seven national weather services, including the Deutsche Wetterdienst (DWD) and MeteoSwiss. Scientists at more than seventy universities and research institutes also use COSMO for climate research. COSMO contains about 300K lines of Fortran 90 code.

Starting in 2010, developers from MeteoSwiss, ETH Zurich and CSCS re-engineered the COSMO model, as part of the Swiss HP2C initiative. The goals of the project were to:

A numerical weather prediction model has three main parts: the dynamical core, the physical parameterizations and data assimilation. The dynamical core of COSMO (40K lines of code/60% of runtime) solves the equations of fluid motion and thermodynamics. Physical parameterizations (130K LOC/25% of runtime) model turbulence, radiative transfer and cloud microphysics. (Assimilation of weather data and radar information accounts for the remaining 15% of runtime).

The physical parameterizations were characterized by low computeintensity: frequent data transfers between host and accelerator memory were time-consuming. COSMO developers copied all the data onto the accelerator, and kept it resident using OpenACC data directives and the present clause. HP2C developers fused some imperfectly nested loops to avoid launching additional kernels (Figure 1). 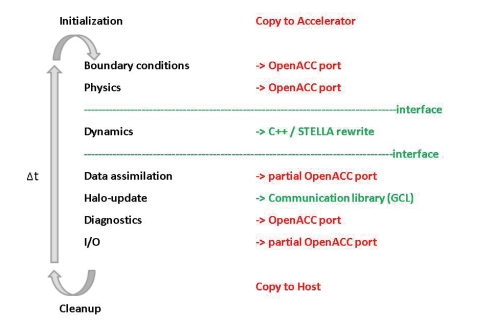 The dynamical core uses the data already on the accelerator in the middle of each time step. The HP2C team aggressively rewrote the dynamical core -- which had only a handful of developers – creating the STELLA DSL to implement the different stencil motifs. Crossplatform portability was ensured by creating both C++/x86 and CUDA backends. HP2C developers used the OpenACC host data directive to interoperate with the C++/CUDA dynamical core.

Increase the compute performance of COSMO in a two cabinet footprint by 40X while maintaining portability to X86 clusters and code readability and accessibility among weather and climate researchers.

Used OpenACC directives for physical parameterizations – where code sharing was paramount – and created a C++/CUDA-based DSL — platform-portable and easily integrated with OpenACC — for the dynamical core.

MeteoSwiss deployed a two-cabinet CS-Storm clustered supercomputer with 192 NVIDIA Tesla K80 GPUs and achieved a 40X improvement in compute performance and 3X greater energy efficiency, while maintaining portability to x86 clusters and accessibility and code sharing in the scientific community.